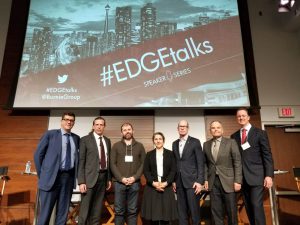 In 2008, a person, or group, known as Satoshi Nakamoto, published a paper describing the first blockchain database. Three months later, it was used by Nakamoto to launch the bitcoin cryptocurrency network. Since then, interest in cryptocurrency investment has exploded, but industry experts insist that crypto’s true value lies in its underlying technology: blockchain.

A blockchain is a distributed ledger technology. Its core value lies in its ability to provide a reliable common version of the truth to members of a business network. Digital records (transactions) receive a unique signature (hash) of a fixed length.  Transactions are then bundled and stored in time-stamped “blocks” that are “chained” to the blocks of previous transactions. This chain of blocks is synchronized across a network of distributed “nodes.” By comparing the last hash in a chain, nodes find consensus on the contents and integrity of the blockchain, making it virtually immutable.

This new technology was the first real solution to a problem that had plagued digital transactions since their inception: the double-spend problem. The issue being that a digital payment was merely a copy of a token of value. Tokens could be copied multiple times and spent in more than one location. With blockchain’s continuous validation and replication of transaction history, single-use for digital tokens can be guaranteed. This, in turn, positively affects the trust deficit.

Another valuable characteristic of the technology is “smart contracts,” which can be stored and executed on a blockchain. This coded feature enjoys the same immutability, and therefore trustworthiness, as the data it manipulates. It allows for the use of business logic with automated transaction attributes, solving, amongst other things, the renege problem. In this situation, a customer might leave a queue (reneging) for various reasons before completing a transaction. When a smart contract is introduced, the customer is no longer disengaged by redirection to a banking intermediary to complete the transaction. The smart contract easily completes the transaction by triggering and validating payment securely and independently.

These problem-solving characteristics are representative of blockchain’s many potential advantages. The following will explain how blockchain can generate value, enhance business efficiencies, and bring about the new era of the Internet.

The True Value of Trust and Data

Business networks are built on top of available infrastructure, which inherently contains deficiencies that can introduce friction into business activities. Many business networks, therefore, engage third-party intermediaries to mitigate deficiencies, such as trust deficits between parties.  These third parties can take many forms: banks, credit card companies, insurance companies, PayPal, Alibaba, auditors, and regulators. However, this centralized intermediary system is hackable, infamously slow, and costly.

Because a blockchain network addresses the trust deficit problem it allows for peer-to-peer transactions (P2P) completely independent of intermediaries. Individuals become owners of their own data, and that data an asset, protected on a blockchain from theft and fraud by immutable, time-stamped record keeping. In a blockchain-powered world, an individual’s medical records, financial records, academic degrees, voting history, professional history, and consumer history, can all be stored in encrypted transactions. A musician’s intellectual property might be stored on a blockchain, with smart contracts triggering automatic payments every time a song is featured in a film. A patient could allow a government temporary access to medical records to help identify and prevent possible outbreaks of disease.  The sharing of this information with specific people for a fixed duration is the choice of the individual, un-beholden to the delays, rules, privacy exposure, or costs associated with an intermediary.

According to Ronald Coase’s theory of the firm, companies only exist due to the high cost of transactions within markets. Traditionally, performing activities in-house has kept these costs low and companies strong. The Internet, created as a network of information, began the process of unbundling the firm. With the creation of blockchain as an entirely new network of information, these transaction costs are so greatly affected that companies have no choice but to evolve as the underlying rationale for their existence is altered.

Blockchain features, such as smart contracts and autonomous agents, can cut costs by enhancing business efficiencies through automation. The scale of this automation can alter the very concept of what constitutes a company; a decentralized autonomous organization (DAO), for example, is a company run entirely through computer programs with next-to-no human participant. This model uses business logic and decision making embedded in smart contracts to automatically execute actions when triggered by pre-determined situational criteria. This new platform dramatically reduces business network friction, and eliminates nearly all traditional transaction costs, paving the way for distributed companies that resemble networks rather than centralized firms.

The Second Era of the Internet

Blockchain is a new paradigm that addresses the very purpose of computing: to automate business processes with the goal of reducing headcount and friction in business networks. It provides unprecedented peer-to-peer trust and can enhance business efficiencies in nearly any industry. When the existing Internet of Things—which is currently held back by the available software infrastructure and related trust deficits—is combined with blockchain’s new “ledger of things,” a partnership is formed. This partnership represents a second era of the Internet, in which discrete devices can confidently engage and contract each other to accomplish a goal. With widespread blockchain implementation, intermediary functions become redundant, companies more automated and decentralized, and the individual consumer more autonomous with improved privacy and increased control of their information assets.

Working with an experienced partner can help you harness the full potential of blockchain technology for your business. As a leading professional services enabler of blockchain strategy and implementation in North America, The Burnie Group will help you to identify areas where blockchain can increase your business’s security and efficiencies, set the right strategy and build the right foundation to substantively advance business goals.

Key insights from the #EDGEtalks panel of speakers:

“This is nothing less than the second era of the Internet”

“This is not about bitcoin. It’s not even about crypto assets. It’s about something much bigger”

“I think this is a new paradigm, and a paradigm is a mental model. And they create boundaries around… assumptions we don’t even know that they’re there.”

“the biggest problem for me…today, the net effect of all this digital on our economy is that we have growing wealth but declining prosperity. Our economies are growing but in most OECD countries the middle class is shrinking. We have a bipolarization [sic] of wealth”

“For the first time in history, people have can now trust each other and transact peer to peer. And this is creating a great opportunity for… people in the middle to rethink their whole value proposition and the way that they operate, to deliver better value to customers at a lower rate.”

“Blockchain is no different than any other technology that preceded it. What happens with new technology is that people think about that, they digest it in the context of what they know and understand today. How can I take that technology… apply it to what I do today, and make it faster and cheaper?”

“People need to roll up their sleeves and invest the time to understand it… They need to sit down and understand what is this, how does it work, and then how does it disrupt your industry and the way we manage data.”

“Little by little, increment by increment, we’re going to migrate into a world where people are going to operate differently, and it’s going to be a weird and wonderful place.”

“The promise of blockchain is a disruptive technology and disintermediary technology…These monolithic business models based on exploiting the data of their customers are going to have to change.”

“I think that’s one of the biggest decisions that need to be made is which data can you share into this commons of data, and in what cases does it make economic sense to do so? And I think that where we discover those golden points where there’s economic sense and it’s feasible to share that data in a way that the entire ecosystem benefits, I think it’s a matter of finding those. It takes work.”